Being an immigrant sucks. If you don’t think so, you’ve either never been one, or you’re lucky (or ignorant) enough to consider yourself an “expat”. You’re far away from your family, friends, comfort zone; there are economical and social impediments, laws might change out of nowhere and catch you with your pants down, the language might be tough… all in all, you’ll officially be a second class citizen, which actually makes some sense as national governments should focus on their native citizens first (I’ll refrain from opening up the whole can of worms about nations and borders and how much it makes sense for them to exist or not).

My wife and I came to Germany with the plan of checking it out and if it was bad, we’d go back after a year. It’s now been 3 years (and 10 days, to be precise), and we’re gearing up for moving countries again. Was it worth it? Totally.

Now, get this, if it was worth it, it means that there were LOTS of good things to balance out the fact that being an immigrant sucks. I mean, it’s easy depending where you come from: if things aren’t in their best shape on your home country, it’s actually a privilege to be an immigrant – or, substituting terms, it’s “a privilege to be a second class citizen”. How fucked up is that right?

Germany is pretty rad on one thing tho: if you’re here, you’re entitled to most of the government programs permanent citizens are (at least that I’m aware of), regarding childcare, social welfare, worker laws etc. We were fortunate enough not to need any of those, but I truly respect them for that.

Even on tougher times we had a comfortable life here, bad things included. But with any bad thing comes all we can learn from it: about ourselves, about others, about the human condition if you’d like.

We’re all bound by our neurological and psychological limitations, and the only thing that can help us with that is stimuli. Being dragged so severely out of your comfort zone gives you a lot of stimuli. For the first 2 weeks, everything everywhere sounded like complete gibberish – German even has the added bonus of having words compounded together when written, which took over a year for me to read comfortably. You truly understand what it’s like having to deal with shibboleths: your brain simply doesn’t hear the difference between two phonemes. I shit you not, if they were too blond, I had trouble telling random German people from each other on public transport.

Now here comes the complicated part: our brains also have “us and them” directly on the firmware level, and societal norms don’t help with that at all. It is, up to a point, extra mental work for anyone not to go into “us versus them”, but like everything, it gets easier with practice. I was fortunate enough to have had lots of friends growing up, from different backgrounds, creeds, customs, sexual orientations etc. So I guess that comes a bit easier for me, which means all the different stimuli was just around to be absorbed and enjoyed, and boy did I do it. People around the office had to get used to me sneaking up to them in silence to hear them speaking in their native languages (from German to Malayalam). I was secretly observing everyone’s traits, ticks, reactions. I worked in a super international team on Blood Runs Cold, and we all shared that enthusiasm, from the cultural interchange to joking around about our stereotypes and accents. 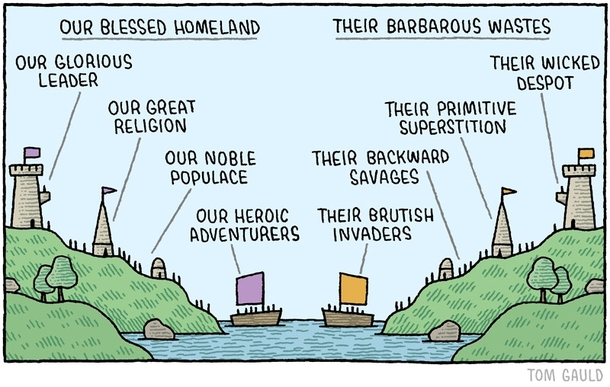 As everything has its two sides, the good part about the “us and them” thing is that it’s essential for you to learn about yourself. Obviously, it also comes with the age (I’ll need an extra bit to write my age from this year until I’m 64 and OH GOD I’M GOING BALD HELP), but that’s nothing without life experiences. In my case, they ranged from the simple realizations like when I said “hey, my opinion doesn’t matter too much on this case because I’m a straight white guy” and a German dude had a laughing fit because I said I was white, to the bigger stuff like being able to officially work as a lead and have people depending on you. The more times your beliefs are put into check, the better.

Brazil has what we call “mutt syndrome“: we think we’re below average in everything, as a country, as people, regarding the work we do. Then you get outside of your bubble and you realize the amazing shit we have to pull off on a daily basis. That’s especially true in areas that are fully established internationally but are just starting to (finally) get solid in Brazil, like game development. As some guy once said “Gamedev in Brazil is like running a marathon wearing Havaianas, knee deep in tar, and the tar is on fire“. Work-life balance is a hot topic at the moment (as it should), but when you’re constantly in a “we either ship this game above quality in 1/3 of the required time or the company shuts down” kind of situation, not doing extra hours is a privilege. Being able to be unemployed for a while is a privilege.

And that’s the thing about privilege, right? It’s complete privilege when you take it for granted and are not even aware of it. My favorite sport when I first got here was watching the wide eyed disbelief from people when telling stories about the daily hardcore shit that goes on in Rio de Janeiro and we basically laugh about it (“rir pra não chorar” seems to be, fortunately or unfortunately, a part of our native Brazilian care package).

Being aware of all your privileges allows you to be thankful. I’m thankful for being able to make a living doing what I love. I’m thankful that I could experience so many wonderful people and so many varied cultures. I’m thankful that I’m able to move countries again and not go completely bankrupt in the process (just 50%). I’m thankful that I was educated and exposed to the world in a way that allows me to notice and appreciate all these things when thinking about them, instead of going defensive and giving into the “us versus them” that is hardcoded in my brain and rewarded by societal norms.

I got in here thinking I would learn German and make no friends, but I’m leaving knowing just enough German to order food and carrying a bunch of new friends in my heart. I thought I’d learn a lot about game development, but I learnt more about how to deal with big companies and office politics. I thought everything would be good back home and that I’d be able to be there for the family I left behind whenever they needed, but life is a fragile thing and comes at you fast.

Now I’m at a point where I consider myself on a pretty good level as a mobile developer. However, mobile games, especially on the F2P market, are not where my heart is. Also, I’m getting older and it’s increasingly harder to scratch my gamedev itch until 3am during weekdays working at home after hours on personal projects (pro-tip: if you CAN not do that and still move your career forward, you’re also privileged).

It’s time to bump it up a notch and try out new things. Fortunately, Bossa Studios seems to be all about that, and that’s where I’m headed by the end of this month. I thank Goodgame Studios for bringing me here, Bigpoint for my time there, and now thank Bossa for the opportunity. But most of all, I thank my family, friends and wife for helping me along the road here. And when I say my friends, I also mean the wonderful new people that went through my life in the past 3 years. That includes any possible shitty people I had to deal with as well – you also taught me a lot and I don’t judge any of you (except smokers. I always judge smokers a little bit, but you’re ok if you’re not smoking in covered places and you throw your butts in the bin).

I wish everyone could find reasons to enjoy their road, but it’s unfortunately not always the case. If you can, be thankful. Help those who can’t, even if a little bit. It’s a nasty world out there and it’s easy to become cynical (I know I have), but I guess that’s just part of the human condition. Maybe it’s all Maya, but it doesn’t matter even if it is or isn’t. So just try to enjoy yourselves and do good, will ya?

Sheesh, I write a lot.

TL;DR: So long and thanks for all the Fish (again), moving to London next week, joining Bossa, love you all, be thankful for the good shit in your life, hug everyone.